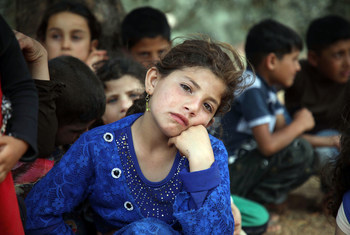 Following the collapse of the latest truce in Idlib at the start of this week, the Senior Humanitarian Adviser to the UN’s Syria Envoy urged Member States on Thursday to increase their support for “critical humanitarian needs” in the country’s last opposition-held enclave.

“A new wave of violence is again threatening the lives of millions of civilians who live in the Idlib area, more than a million of whom are children”, Najat Rochdi said in a note to correspondents. “During the lull in the fighting, many civilians had returned to their homes and are currently in areas where heavy attacks have resumed putting them at great risk”.

More than 500 civilians have been killed and hundreds more injured, since the escalation in fighting began in northwestern Syria in late April. Displacement figures have also climbed at “an alarming rate”, with some 400,000 men, women and children forced to flee, “many of them multiple times”, she said.

Pointing out that most had fled to “densely-populated areas”, Ms. Rochdi noted that “an additional 30,000 people have been displaced to areas controlled by the Government”.

“Shelling in neighbourhoods under Syrian Government control also needs to stop”, she stressed.

Parties to the deconfliction system – a mechanism used to avoid misunderstandings and enhance the safety and security of humanitarians and the overall relief effort – have been formally asked by the UN to provide information on instances where it appears to have broken down this year.

The Humanitarian adviser reported that Turkey had replied to “some of the requests” and “we are still waiting to hear” from Russia, which has lent aerial and other support to the Government’s military campaign.

Taking note of discussions to establish a “safe-zone” in northeast Syria, she said “humanitarian actors are increasingly concerned by statements suggesting a possible military intervention, which would have severe humanitarian consequences in an area that has already witnessed years of military activity, displacement, droughts and floods”.

Moreover, the area was also recently affected by fires that have impacted crops and desperately-needed agricultural production.

Response efforts to support the 1.6 million people in need there, including 604,000 internally displaced persons, “continue at scale”, she continued, emphasizing that the humanitarian response “must also be maintained in Al Hol camp in the northeast”, where some 68,800 mostly Syrian and Iraqi women and children have sought shelter.

“Protection remains a key concern”, flagged Ms. Rochdi. “Aid has to be provided without discrimination to all those in need, and Member States should take measures to ensure that their nationals are repatriated in accordance with international laws and standards”.

More information about the whereabouts of family members also needs to be provided to camp residents.

The population in the Rukban settlement, close to the Jordanian border, is declining, with some 17,700 people having left for Syrian Government-controlled areas.

The UN has been granted approval to implement a joint UN-Syrian Arab Red Crescent interagency plan to assess needs; determine the exact numbers of people wishing to leave; assist voluntary departures from Rukban; and provide relief to those remaining.

“Preparations are ongoing”, she asserted. “All parties are encouraged to support the implementation of the plan and pursue efforts to explore further solutions for those opting to remain or leave to a third destination”.
Curtsey: UNICEF/Photo Aaref Watad